When I was working on finishing up the Balloon short film, my team ran into an issue where Maya’s batch render would go crazy and our character would lose parts of her body while the other parts moved through the animation. Or the clothes would be the only thing moving and nothing else would move.

My team mate, Andrew Rodriguez stumbled on a thread where this awesome guy John Mather made a script as a way to solve this exact issue. Apparently, we weren’t the only ones having batch render issues. His script takes a start and end frame number, like 0 to 200, and renders out from the current camera with whatever settings you have in your Render Settings.

In my journey to learn more on the technical side, I decided to make a window for this so I could learn how to extend the function of a script, since his didn’t have a UI. This is my version of the script that has a simple window for inputting the required data to run the script. And also, I really wanted to post this because it was an amazing find for my team since it saved our final project.

This is the link to where you can see the discussion and if there are any updates to his script.
http://simplymaya.com/forum/showthread.php?p=318227

And this is the script:

I’ve been learning how to script for a few months now and the hardest part has been thinking of finding a way to use what I’ve been learning. Not being a programmer or having any kind of formal training in that field, it’s been very interesting since I didn’t know where to begin, but it was still a fascinating thing to me to be able to make things that help the process, that automate things. So I just want to post two little things that I managed to make and learn from.

I made a little thing that goes through the steps of mirroring an objects position, and then I started asking well what if I wanted a choice to duplicate it or not, and also what if I wanted to mirror across a different axis. So that’s what this script does organized in a window. It’s very simple but handy, to me at least.

This next script is extremely simple, but it was really confusing to understand as I was just starting to learn this stuff. For awhile I had tried making For Loops for arrays, but kept getting errors. Then I found something someone posted stating the obvious that made sense.

This script takes your selected objects, runs a for loop through the selection that self-groups each object, and renames it appropriately. Like selecting a circle, grouping it, renaming the group “grp_circle”.

I set up a file to help a friend out with their rig awhile ago. It shows a relatively simple concept of layering a rig to allow for extra overall control. I thought this was pretty nice when I first learned it, so I wanted to share this with anyone starting out who may not be aware of this technique since it’s not something that seems so simple when you’re first learning how to rig.

The file is seperated in three seperate files, showing the steps of how to setup the fingers of a hand rig with Set Driven Keys, that control custom attributes to pose the hand, and extra finger controls that allow for tweaking of the preset poses or to make completely new poses.

You have your basic joints for your finger. Then you have your control objects, like a nurbs circle, fitted around the joints. They will be orient constrained to control the joints after the control heirarchy is set up.

The control objects are then self grouped twice, one to set the SDK on and one as the null node that doesn’t do anything.

The files are pretty easy to understand, but if you have any questions please feel free to contact me for help.

I was able to clean up a couple of shots. There’s more I would like to work on, but I wanted to get to working on new projects with what I was able to learn from this one. This was an ambitious and complex project that allowed my team to be challenged in many ways with story  development, character designing, 3D modeling/rigging/animation, and it was our first time attempting anything like this. The project went through many changes, even into the last couple of months where we reworked the story structure and cut out a few things we’d worked on. It was a tough but enjoyable experience. 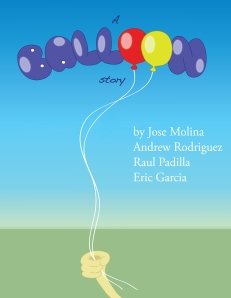 I was the Director/Writer responsible for Concept Art/Story Development, Character Rigging, Ncloth and Paint Effects Dynamics, Compositing, and Music.
Along with my team mates, I also did a little bit of Clean Up Animation, part of the Lighting/Texturing, part of the Character Modeling, and part of the Backgrounds.